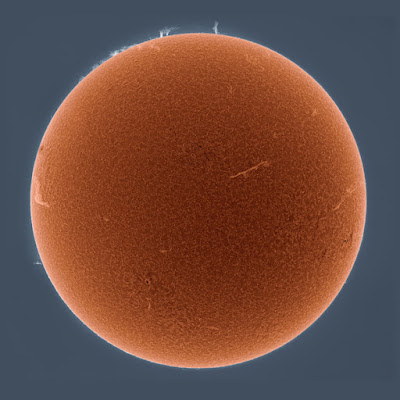 Our Sun (by astrophotographer Alan Friedman)

Two Earth Suns, we'll get back to that, first wrap your head around 300 Sextillion stars! That's 3x more stars in the universe than was previously projected, "and many, many planets that could support life."

Meanwhile back in our galaxy, global solar storms erupted across the Sun. This "Great Eruption" consisted of 'over a dozen shock waves, flares, filament eruptions, and coronal mass ejections that covered half of the sun's surface' in just over 24 hours.

...and the two Suns I mentioned, Betelgeuse (the second biggest star in the universe), is "running out of fuel in its centre" and before collapsing upon itself a giant explosion will occur, tens of millions of times brighter than the sun. 'One day, night will become day for several weeks on Earth...we’ll have incredible brightness for a brief period of time for a couple of weeks and then over the coming months it begins to fade.' says Dr Brad Carter, Senior Lecturer of Physics at the University of Southern Queensland.

Here's a realistic view of a passing comet while you're traveling on the mothership towards the Edge of the Universe (after taking Stephen Hawking's advice to abandon Earth).

Jimi Hendrix - "Third Stone From The Sun"
Posted by Ras Jim No comments: